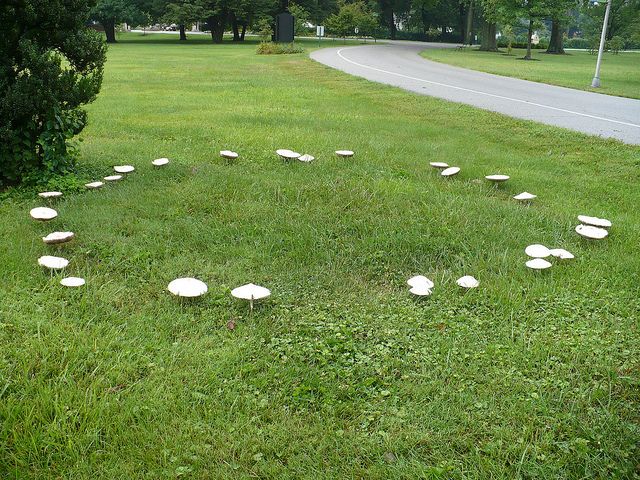 Spring showers might bring May flowers, but rainy summer days are often followed by fairy rings feeding the imaginations of daydreamers of all ages. However, Jasper County Extension Agent Brock Fry advised that fairy rings are actually a sign of a diseased lawn.

Usually appearing following a spring or summer shower, fairy rings pop up in circular bands of various sized diameters. “Fairy Rings are a disease caused by fungi, or mycelium, in the soil,” shared Fry. “The fungi moves out and away to continue feeding on organic matter in the soil.

The fairy ring fungus grows outward from a central point at a rate varying from a few inches to as much as several feet each year according to Turfgrass Specialists Richard Duble, also of the Texas Cooperative Extension. “Where several distinct rings converge, fungus activity stops at the points of contact, resulting in a scalloped effect to replace the circular shape of the original rings.”

Folklore insists that the sudden appearance of a ring of mushrooms is a sure sign of fairies and elves or even dark forces and otherworldly presences. Tales were passed down for generations of the creatures and magic responsible for the naturally occurring phenomenon now known as fairy rings. Duble went on to relate that centuries ago, people thought that the mushrooms appeared where ‘fairies’ had danced the night before.

A tuft of dark green grass usually follows the mushrooms, a result of the nitrogen release after the fungus breaks down the organic matter in the soil. “A ring of brown or dead grass may also develop, caused by the depletion of soil moisture,” continued Duble. “If you dig into the area of dying grass, you will likely find a dense growth of white mycelium, as water will not penetrate this zone of dense mycelial growth.”

Fry went on to share that during periods of unfavorable conditions, low temperature or drought, mushroom production and fungal activity stops and may not resume for months or even years, which makes the appearance of a fairy ring pop following a summer shower.

In addition to feeding imaginations, fairy rings will eventually feed the lawn it resides in as its decay provides nitrogen as it feeds off of decaying tree roots or other organic matter. Despite a short unsightly appearance, they are not harmful to the lawn and can be masked by routinely knocking down or mowing the mushrooms and aerating then drenching the soil.